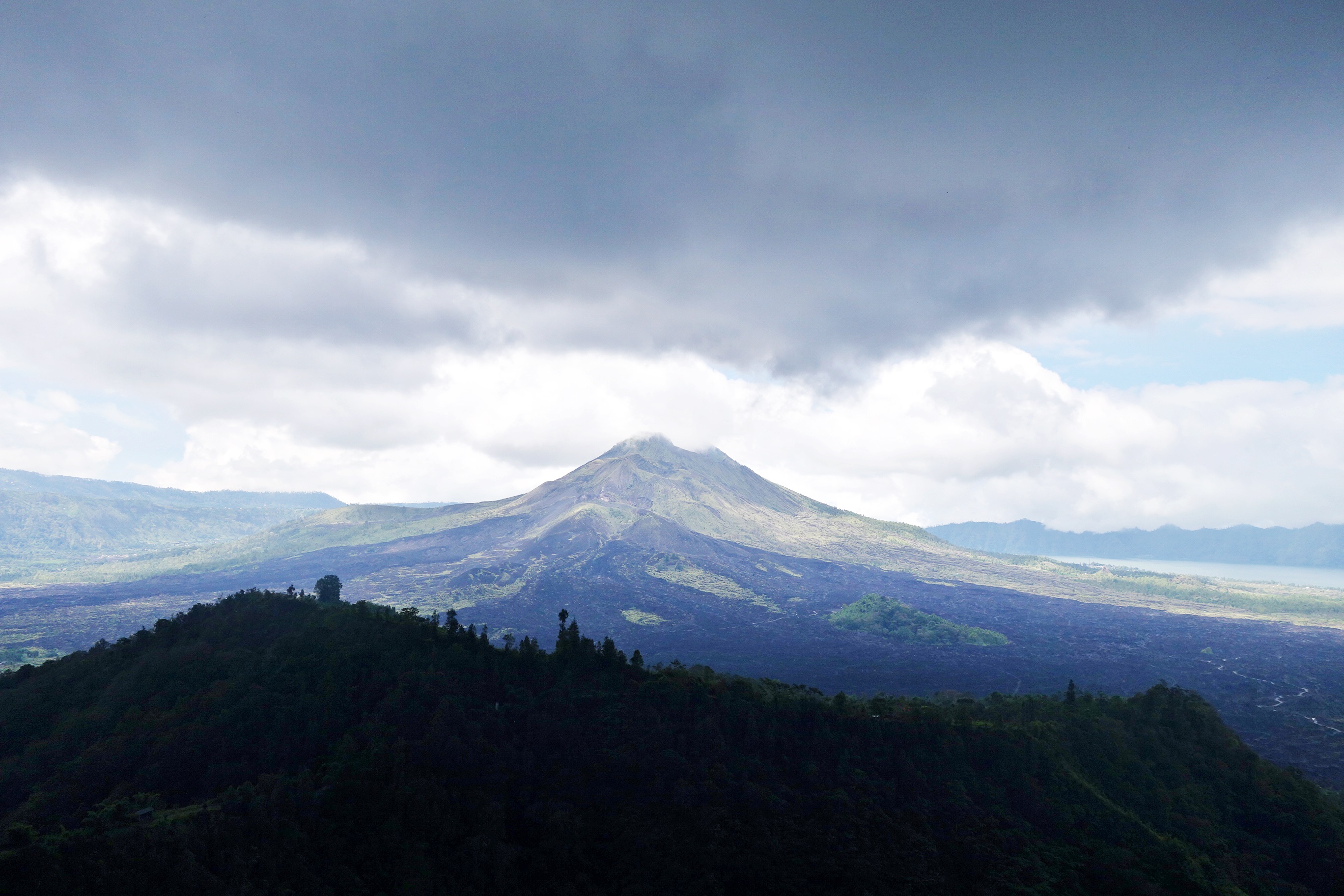 When Mike and I were making a list of things to do in Bali, I suggested to go on a sunrise trek up Mount Batur, an active volcano in the Kintamani district, about an hour’s drive from the Ubud center.

“What?!” he exclaimed, as if I suggested that he dyed his hair pink. “No!”

Okay, so the husband was not too hot about waking up at a crazy hour and climbing up an active volcano, at least not for our honeymoon. I still wanted to include Mount Batur in our tour though, since it’s one of the most iconic attractions in Bali and is also considered to be sacred by Hindus and the Balinese people, so we arrived at a compromise: If we can’t climb up Mount Batur, we should at least eat with a view of Mount Batur.

Our driver Made brought us to a strip of restaurants in the Kintamani area with a view of the volcano. Not really knowing which of the eating joints was the best one, we settled for one called Grand Puncak Sari because from the outside, we could see that it offered a magnificent view of Mount Batur.

The restaurant looked more quiet from the outside but when we went inside, we discovered that it was actually quite packed. Looks like it’s a popular choice of tourists and locals alike! Inside, the restaurant looks very vibrant with its rainbow-colored drapes, bright purple table cloths, and elaborate buffet stations. While the restaurant is buffet style, they also serve a la carte dishes. For the buffet, the selections could use more variety. Back in the Philippines, when we say “buffet,” we really prepare for it like it’s a huge event. We eat nothing or very little for the whole day until we get to the buffet. We wear fat-masking gear (dark-colored and/or loose tops or dresses, pants that can be easily unzipped or unbuttoned when the gut expands, etc.). And when we finally get to the buffet stations, we actually strategize on ways to maximize the food (e.g., Eat sushi first before moving on to the meats / Go easy on the meats and carbs so as not to get too full right away / Discard more “common” items like corn or bread and pile up on items that would be expensive if you order them outside like prawns and salmon). We spend a minimum of 2 hours at all-you-can-eat buffet restaurants because we try to stuff in our gut as much food as we can… and there is just so much food that it’s almost impossible to sample all! So when we arrived at Grand Puncak Sari, which was the first buffet in Bali that we’ve been to, I felt a bit underwhelmed. Because there wasn’t much on the menu, I didn’t even go for a round 2. Mike only went back once, which is unusual for someone who enjoys buffets so much.

The service also needed some improvement. The servers weren’t rude but they weren’t warm either. I guess that’s the drawback of eating at a restaurant filled with too many diners — the servers don’t have time to go above and beyond their service. They only have time and energy to just do the bare minimum (take your order, serve the food, hand you the bill, done!).  I guess I was just looking for that distinct Balinese hospitality that we have gotten so used to getting for the past few days.

Since we came there primarily for the view anyway, we decided to sit outside so we can have a good look at the volcano. We were quite lucky to have secured a spot directly opposite to the volcano even without a reservation, though I would suggest booking in advance to avoid any disappointments. The only problem about being seated outside would be the nettlesome flies. It’s a little hard to enjoy your food when flies keep buzzing around in front of your face or landing on your plate if you even look away for a second. In fact, why don’t you try testing how good your eyesight is and  spot the fly that joined us for a photo below?

After coming from the Kayon Resort, which consistently served incredibly delicious food from their restaurant, we found the food at Grand Puncak Sari to be just okay. I know it’s not fair to compare food from a 4-star hotel to an inexpensive buffet restaurant and we also don’t want to sound like food elitists (“oh, they ate at a hotel everyday so now they have fancier taste buds!”) but though Grand Puncak Sari’s food was satisfactory, there was nothing in the menu that really blew us away. The food is not horrible, but there are probably better options around the area. Here was our bill for that meal:

Obviously, because people come here to eat while marveling at the view of Mount Batur, expect to see all sorts of tourists taking selfies by the volcano or taking photos of it. I think the owners of Grand Puncak Sari have accepted the fact that people really go to the restaurant more for the scenery than for the food. Of course, we, too, had our photo taken by the beautiful Mount Batur!

It was drizzling when we arrived at the restaurant and then it started to pour just while we were already eating so my photos are slightly dark and the clouds look overcast. I’m sure the view is so much more glorious in good weather but even with the gloomy weather, Mount Batur was still really majestic. My amateur photos couldn’t capture the natural beauty of the place but in person, the ambiance was amazing!

While the food at the restaurant was so-so, the view compensated for it. If only for the opportunity to take photos of the beautiful volcano and its surrounding landscape, I’d say that was worth driving to Kintamani. I’m looking forward to the day when I’m actually ON the volcano, and not on the opposite side of it. I just hope that it doesn’t erupt when we’re climbing it! 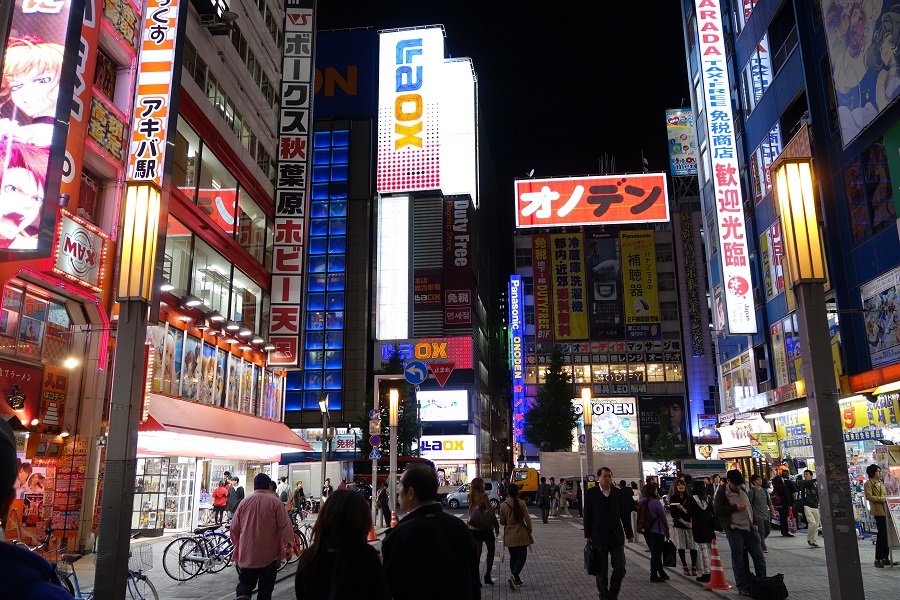 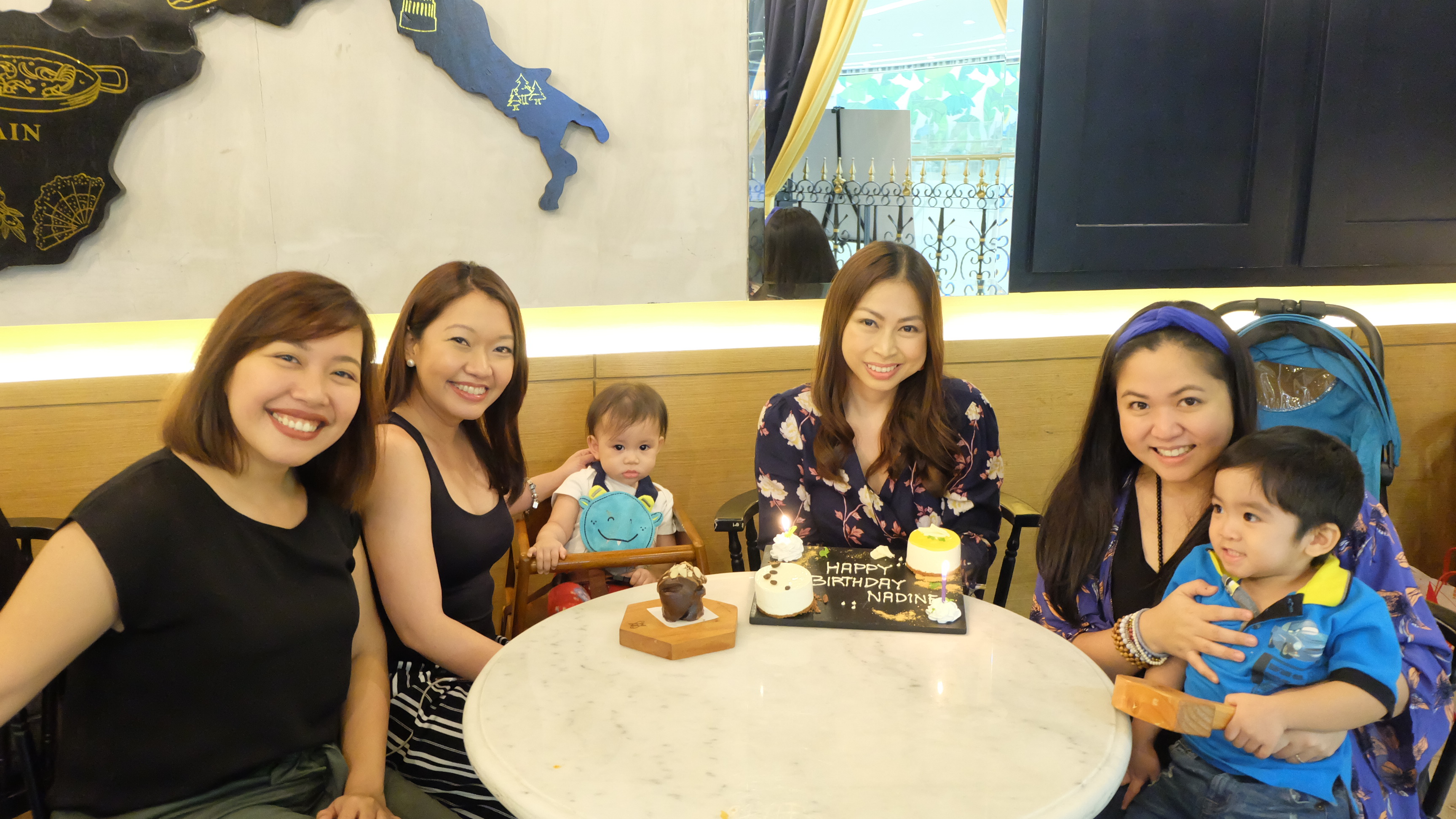 My 35th Birthday at Vanderlust Bistro: A European Travel-Themed Restaurant 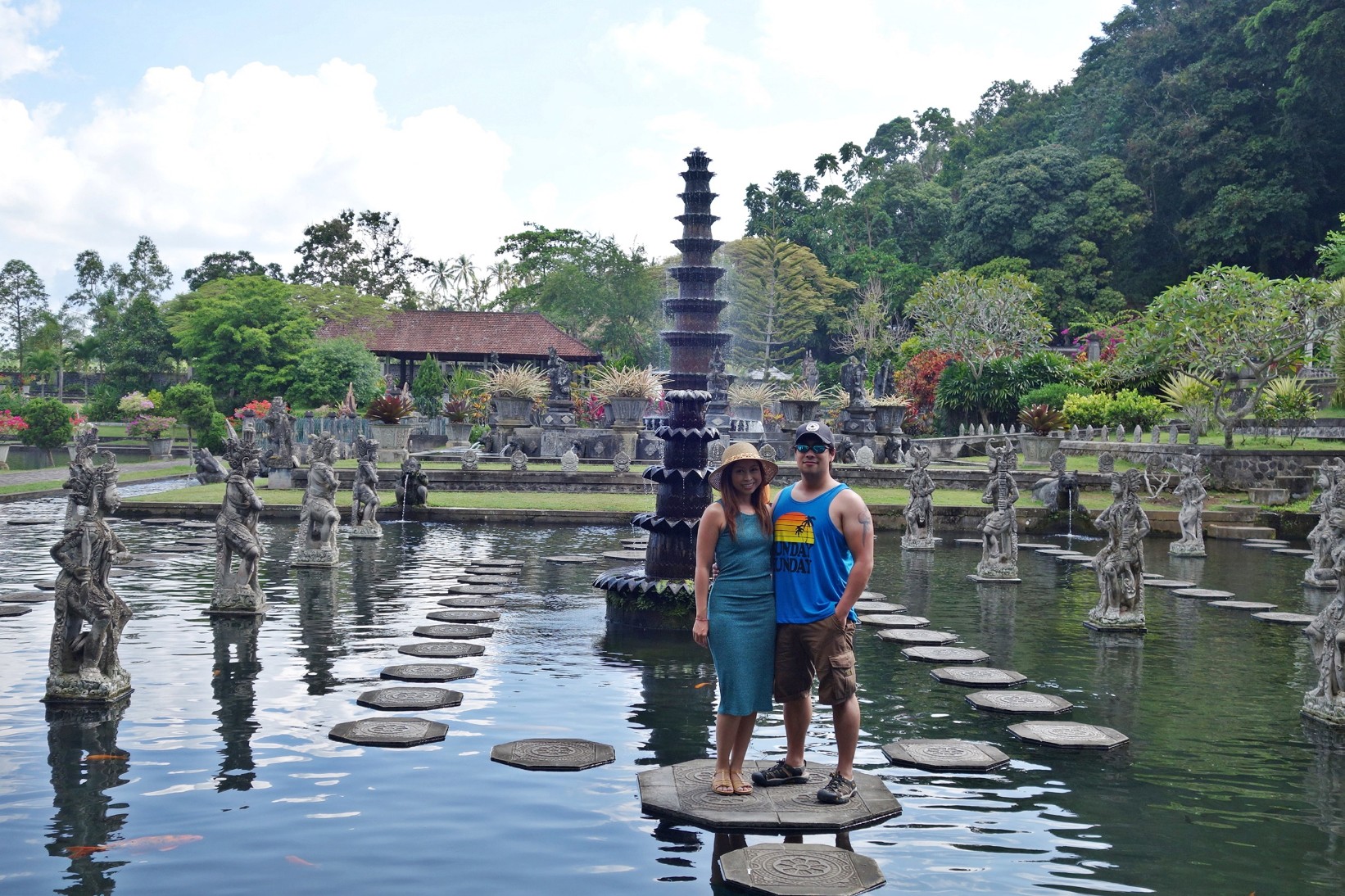